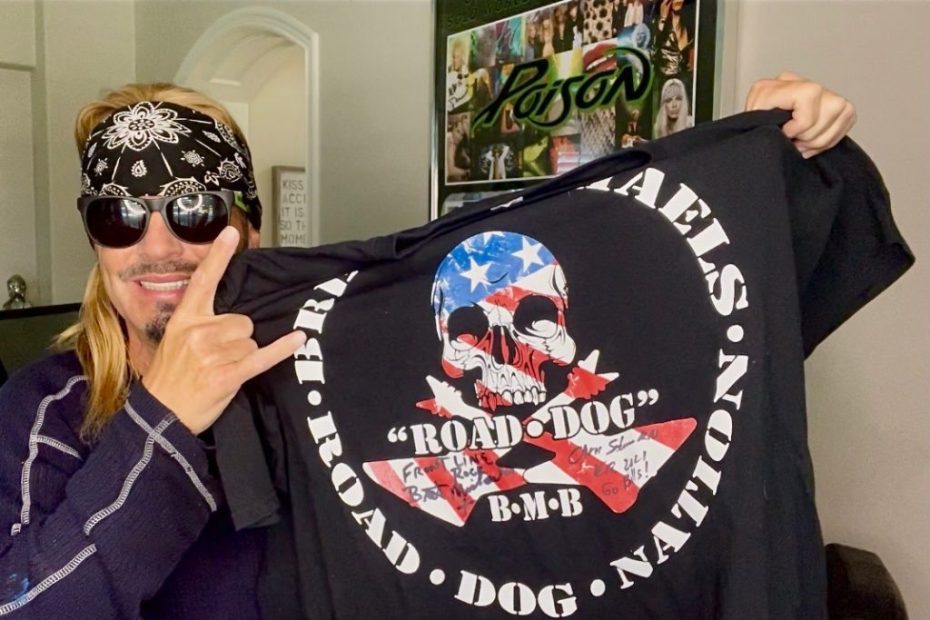 Scottsdale, AZ—October 28, 2021— Global music icon Bret Michaels is well-known for selling out arenas and stadiums around the world, but the lifelong Type 1 diabetic is also no stranger to hospitals, where his long-standing respect for healthcare workers has solidified over the course of his adult life. He makes no bones about having to find ways to remain “Unbroken”, even penning a song with his youngest daughter Jorja about overcoming life’s challenges and coming out better on the other side.  Michaels is continuing in his true form by creating a fundraising opportunity out of a simple friendly wager with HonorHealth Emergency Room RN, Chris Stewart. The bet resulted in a unique autographed shirt signed by both Stewart and Michaels to be auctioned on BretMichaels.com, with all proceeds going to HonorHealth Foundation.

States Debra Stevens, Senior Vice President of Communication and Donor Relations at HonorHealth, “We are very grateful for Bret’s philanthropy and compassion for all people and are truly honored to partner with him on this endeavor. The past two years have shined a bright light on just how essential our frontline healthcare workers truly are. HonorHealth caregivers have served their patients with dedication and unending compassion throughout this pandemic.”

Michaels and Stewart struck up a friendship after Michaels was admitted into the Emergency Room at Scottsdale’s HonorHealth, and both realized that they actually had much in common.  Their love for sports, their families, and support of frontline workers, first responders, and the military, kept the conversations going, eventually leading the two to make a fun gentleman’s bet on a football game between Michaels’ beloved home team, the Pittsburgh Steelers, and Stewart’s Buffalo Bills.

“After I got to know Bret after several serious medical events, including a life-threatening brain hemorrhage, we decided on this friendly wager for the first football game of the season,” recalled Stewart. “My team lost, so I had to wear a Bret Michaels t-shirt for 2 weeks straight. I decided to have some fun with it, as working in healthcare at this time is unprecedented and difficult. The pandemic has definitely taken a toll on caregivers. This shirt and I have traveled between work, home, and the California beach. I also committed to sending updated pictures of the journey to be posted on BretMichaels.com with his socials, and the story caught on. I admit that wearing this shirt initiated several enjoyable conversations with strangers – making a friendly wager even more fun!”

A career-long philanthropist, Michaels’ Life Rocks Foundation gives to organizations such as the ADA, JDRF, St. Jude’s, and many other foundations. Michaels also recently fought diligently to pass SB97 in California to provide much-needed diabetes education to school children, along with Ease T1D and State Senator Richard Roth (follow that journey on BretMichaels.com). He even created the Bret Michaels Hospitality and Music Room at St. Joseph Barrows, where he was transferred for his brain hemorrhage after initially arriving at HonorHealth Scottsdale Thompson Peak.  He saw the bet with Stewart as not just good fun, but also another way to give back.

“Chris’ dedication to this was absolutely awesome,” said Michaels. “He exemplifies passion with a purpose, and, with his help, we were able to transform a simple football bet between two buddies into a way to give back to the people like him at HonorHealth who have given so much during these incredibly difficult times.”

Stewart added, “We’re not heroes, just doing our job. All I can ask is that people be kind to each other and try to find joy in their life. Even if that’s just wearing a t-shirt for 2 weeks with the name of a very charitable man on it, who I am blessed to call my friend – and who also happens to be a rock star.”

These sentiments echo Michaels’ own feelings – that reaching out to help someone should be paramount in one’s life. Michaels decided to auction the shirt that Stewart wore, adding his signature to it along with Stewart’s. The auction goes live on Monday, November 1st, and will directly benefit the HonorHealth Foundation, which supports their Emergency Services, Frontline Caregiver, and the Greatest Needs Fund.

To bid on the shirt when it goes up for auction, visit www.BretMichaels.com.

To read more about Bret’s lifelong battle with diabetes and unbroken fighting spirit, check out his “AutoScrapOgraphy: Volume 1”.  And to see Chris Stewart’s journey, along with more inspirational people and stories, visit Bret Michaels on his website or his official pages on Instagram, Facebook, Twitter and TikTok.