One Year Ago: HUMANITARIAN OF THE YEAR BRET MICHAELS GIVES BACK THIS CHRISTMAS TO THE HURRICANE-RAVAGED ISLANDS OF THE BAHAMAS AND PUERTO RICO 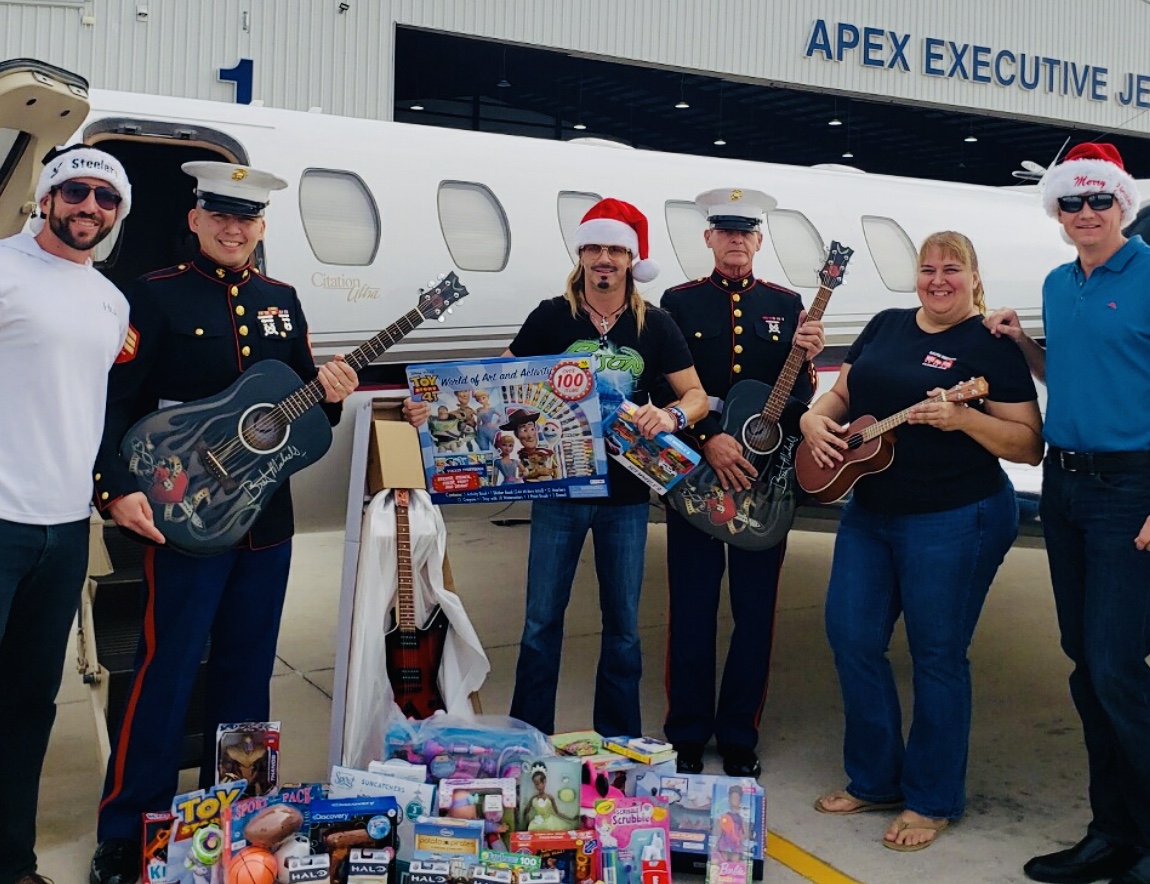 CURRENTLY ON HIS UNBROKEN WORLD TOUR, MICHAELS WILL FLY HIS PLANE TO THE ISLANDS IN BETWEEN SOLD-OUT SHOWS

Miami, FL—December 21, 2019—Global music superstar Bret Michaels, recently honored as Humanitarian of the Year at the 88th Annual Hollywood Christmas Parade, is taking his plane for a holiday relief trip to the Bahamas and Puerto Rico.

“Michaels’ relentless effort to give back is why we chose to recognize him for this year’s award,” commented Emma Sharratt MacEachern, the co-executive producer of the Hollywood Christmas Parade. “He is continuously looking for opportunities to help others, so in the aftermath of Hurricane Dorian in September, he knew he needed to do something to help. At his own expense, Michaels will take his plane to drop-off much needed supplies and toys to people of the Bahamas and Puerto Rico—many of who are still badly hurting in the wake of Hurricane Dorian and Hurricane Maria’s devastation.  This giving spirit is another example of why the Hollywood Christmas Parade recognized Michaels with the Humanitarian of the Year award.”

The music icon and longtime philanthropist began this weekend by taking his jet from Florida to the Bahamas, which he filled with much-needed supplies. In partnership with Operation AirDrop and the Paradise Fund, Michaels loaded up his plane with gifts and food to bring to families in the Bahamas. In what some call a Christmas miracle, Michaels even brought a 9-year old Bahamas resident, Emma, back to the islands to be reunited her with her family, whom she hadn’t seen since Hurricane Dorian hit.

Today, Michaels continues his humanitarian efforts by flying to Puerto Rico, where he will deliver another much-needed plane-load of gifts, toys and supplies for the children of the island. An avid supporter of our nation’s military, Michaels is proud to partner with the Marines Toys for Tots Foundation for this trip to deliver the supplies to Puerto Rico.

“Having had the pleasure to speak with Bret Michaels just prior to his receiving the Humanitarian of the Year award at the Hollywood Christmas Parade, it’s easy to see Bret’s community service goals certainly align with those the Marine Corps has promoted for over 72 years through our Toys for Tots Program.” said retired Marine Colonel Ted Silvester, Vice President of the Marine Toys for Tots Foundation.  “Bret’s commitment to community helping children as well as military members and veterans both on and off the camera is a regular part of his life.  After hearing about the challenges Toys for Tots faced generating support in Puerto Rico, Bret immediately rearranged his busy December schedule to fly in a plane full of toys to ensure the 55,000 children seeking assistance were able to experience the magic of the holidays. Finding a present under the tree on Christmas morning is an experience every child deserves, and with the support from Bret and his family, Toys for Tots will be able to fulfill the Christmas holiday dreams of many children who otherwise may have been forgotten”

Michaels is currently on his Unbroken World Tour which continues to sell out arenas around the globe. Summer 2020 will bring more shows throughout the country for his solo band and the iconic singer is also reuniting with his original bandmates from Poison for the most anticipated tour of the year, together with Motley Crue, Def Leppard and Joan Jett which is selling out stadiums across the country.

You can follow Michaels’ adventures on his social media accounts:

Bret Michaels is a multi-platinum global music superstar whose multi-faceted brand encompasses record-breaking touring sales, TV stardom and chart-topping songs. A successful entrepreneur in addition to his musical achievements, he created the multi-million dollar selling Pets Rock Collection with PetSmart, launched his own line of custom guitars and created “Bret’s Blend, Diet Trop-A-Rocka” which is a number-one-selling beverage for Dr. Pepper/Snapple Group.

Michaels, a lifelong diabetic, the son of a veteran, and survivor of a life-threatening brain hemorrhage has always stood up to any challenge that was thrown at him.  As a type 1 juvenile diabetic since the age of 6, he consistently leads the charge for diabetes awareness. He developed one of the first diabetic youth camps to help children with the life-threatening disease and teach them how to manage it into adulthood. Michaels also recently supported in-person the California bill SB138 which aims to bring diabetes education to the state’s schools. Through his Life Rocks Foundation, he has raised millions of dollars for charity and he has additionally personally donated to causes throughout his career, including his winnings from “Celebrity Apprentice.” Michaels is also personally donating $10,000 this Christmas to Vanderbilt pitcher Tyler Brown’s family for assistance with his daughter’s Down syndrome and health conditions. He is additionally refurbishing the room and hospitality suite that he built for patients and their families at St. Joseph’s Barrow Neurological Institute in Phoenix. His philanthropy has helped not only diabetes education and research but also a diverse range of causes such as childhood cancer, Veterans organizations, PetSmart Charities, Operation Homefront, Feelgood Foundation and many more.

Michaels’ latest hit single and video, “Unbroken” is dedicated to the idea of overcoming any challenge that life puts in front of you. He co-wrote and recorded the song with his youngest daughter, Jorja Bleu, who currently attends a music and arts school. His eldest daughter, Raine, is an in-demand model after being a finalist in the Sports Illustrated Swimsuit Search earlier this year. Michaels himself is one of the most sought-after performers in the world, keeping him on the road for each of the last 10 years for nearly 300 live performances, speaking engagements, charitable concerts and private engagements yearly.